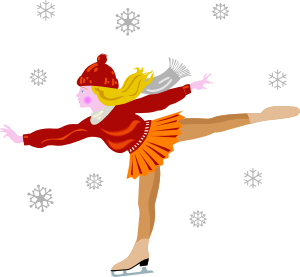 Yesterday on the ice I was so determined to land my axel.  My mom demonstrated it so gracefully I just had to get it.  So I attempted my axel over and over again until I was so tired I fell down every time I tried to jump.  For a couple of minutes I tried doing something else so I wouldn't get to dizzy from jumping so much.  The director of the ice rink came out to see what I was doing.  "Hey Alyssa lets see one of those axels I bet you could do one".  "OK" I said nervously.  I did one and she didn't seem that pleased.  She helped me by  telling me to jump straight up into the air and cross my leg over the other so I wouldn't land on the wrong foot.  I tried it again and again so determined to land it.  Until finally after the hundredth time I landed correctly.  I was so happy I jumped up and down so much that I almost fell over!  When it was time to get off I was already looking forward to the next time I could skate.

Thanks
Alyssa
Posted by Alyssa at 8:10 AM