Water for a Race

Just yesterday my dad participated in a race, in our community, with 2,000 people!  My dad had never run a race before, but he is really fast, so I was pretty sure he would do well.  Anyway the director of my figure skating club wanted some of the girls from the figure skating club to pass out water to the racers.  We gladly accepted, we would love to cheer on our dad while he's in his very first race!  The only thing we didn't like was that we all had to get up around 7:00 on a Sunday morning.  No!  My one day to sleep in!  But thankfully we didn't stay up too late on Saturday so I was able to wake up pretty easily.  Once we (my mom, my sister and I) got to the water tables we had to fill up a lot of plastic cups with water.  Some of my other figure skating friends were there so we got some extra help, which we would really need once the race started!

Finally we had filled up two whole tables covered with plastic cups of water.  After a few minutes of waiting we saw the first runner come down towards us.  We all held out a cup of water and waited for him to grab one.  He didn't.  He was so focused and concentrated that he barely noticed us.  The next couple racers behind him didn't bother either.  But finally after what felt like an hour of waiting a big group of people started coming our way.  We all picked up a glass of water and held it out for the runners.  One snatched one out of my hand and half of his water spilled out but he didn't seem to care he just kept running.  Almost everyone did the same thing.  Water was spilling everywhere!  One guy dropped his whole cup of water onto my tennis shoes!  I was bothered by how that felt for the rest of the time! After the racers finished their water, they tossed it aside onto the ground.  I knew we'd have to pick up all of the 2,000 something cups when it was over, that was something to look forward to, I said to myself sarcastically.  For about 20-30 minutes people were crowding around the water tables frantically grabbing or asking for cups of water.  Soon we were almost out of cups, but thankfully the amount of people were slowly declining.  Once there was no one left, we got out a couple of huge plastic bags and picked up all of the plastic cups.  Surprisingly it didn't take that long since we had a whole bunch of people from our rink helping.  Once we left our group, we found our dad and congratulated him.  We asked him what he had got.   He said he had gotten 877th place.  It doesn't sound that good but out of 2,000 people it's not bad, especially since that was his first race ever!

Today our dad surprised us by taking us out to see the new movie, The Avengers.  I'd wanted to see it the first week that it came out but my dad said otherwise because he knew it would be super crowded!   But anyway the movie was great!  It's already one of my favorites.   It's funny, action packed and just really awesome!  If you haven't seen it yet I would really suggest you do.  It has all of the awesome superhero characters like Iron Man, Thor, Captain America, Hawk Eye and the Hulk, and they all work together to save Manhattan.  This movie was amazing!  I would definitely recommend it! :) 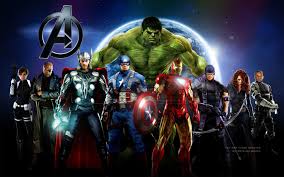